The New Character tab will create a new character so it can work with the Ultimate Character Controller. The Quick Start guide can be used for quickly setting up a new character. This page will go more in depth for each option.

A reference to the character model. This field can be left empty if you’re using a first person perspective and don’t want to have a body/legs.

Visible if using a first person perspective. When the first person items are created they are drawn first by the camera. This field specifics the arms that should be drawn. Multiple items can specify the same set of arms, or each item can use their own set of arms.

Visible if using a first person perspective. This field allows you to specify any object that should be hidden when the first person view is active. In most cases this will include the character’s head and arms. This field will automatically resize when a new object has been added. If your character model does not have the head/arms separated and you don’t have access to the original source file you can separate the objects with a tool such as the FPS Mesh Tool.

If enabled the character will have the Jump, Fall, Move Towards, Item Equip Verifier, Speed Change, and Height Change abilities added to it.

Allows the character to be specified that it will be used as an AI agent. AI agents do not need certain components that check for player input such as the Ultimate Character Locomotion Handler component. With this option enabled it will also not add the Unity Input component because the AI will be controlling the input rather then an external input source such as a keyboard or controller.

This option does not actually add any AI to the character, it just sets up the character to be able to be used with an AI solution (such as Behavior Designer).

Will the character carry items? If this option is enabled then the item related components such as the Inventory will be added.

Specifies the location of the Item Collection asset if the Items field is enabled.

This option should be enabled if the character has any attributes such as health, shield, or stamina.

Should the character use Unity’s Inverse Kinematics system? Unity’s IK system does not support generics so your character must be a humanoid to use it.

Specifies if the character should contain any foot effects such as footprints. This uses the Surface System.

If the Ragdoll toggle is enabled then Unity’s Ragdoll Creator will open after clicking Build Character. If your character is a humanoid then the values will automatically be filled in. 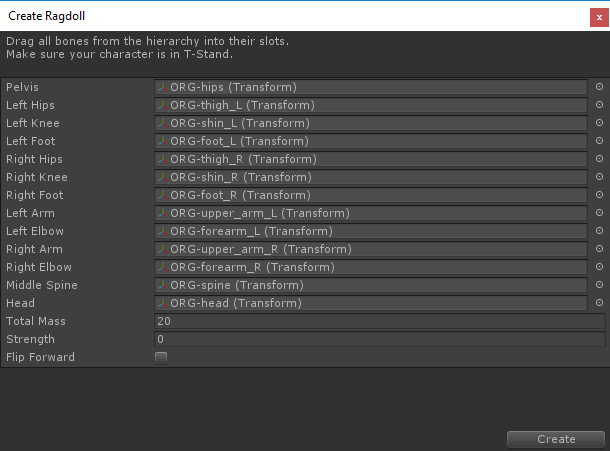 Allows for the character to be preconfigured with already defined values. This is useful if you have a set of default character settings that you like to use and want to apply the same values to a new character. See the State Configuration page for more information.

After you have made your selections you can click the Update Character button. This will apply the changes to the character.