The MeleeAction is used by item such as sword or body. It detects collisions and impact the targets. 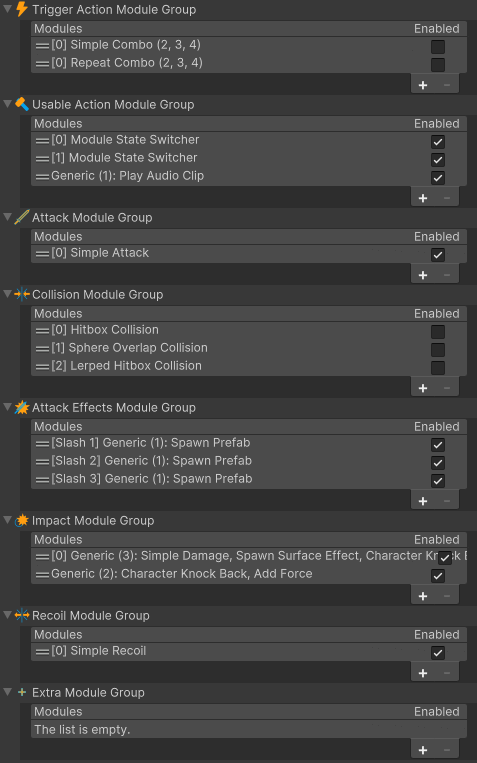 One of the properties of the MeleeAction is to be able to create combos within a single component. This is done by having multiple AnimatorAudioStates within the Trigger. In addition a use can trigger multiple attacks each with their own ID (for example a special attack that swings the sword rapidly hitting multiple times).

The Module groups for the MeleeActions are

The Attacker module is the main module controlling how many attacks to do. Each Attack comes with a MeleeAttackData containing the properties

A basic module that does a single Attack and use AnimationSlotEventTrigger for start complete and chain.

A module that does a multiple attacks and use AnimationSlotEventTrigger for start complete and chain for each of them. A MeleeAttackData can be assigned for each to allow different effects and/or impact.

Do not confuse this attacker for combos. This is an attacker that causes multiple attacks. For example a special attack that does multiple slashes really quickly.

When an Attack starts the Collision will start checking for hits, whether it is using physics cast or hitboxes.

There are times where the hitbox moves so quickly between frames that it can miss small objects. The lerped Hitbox will detect collisions by lerping between the previous frame and new frame position. The density of the lerp can be set.

Use a SphereCast in front of the character to detect collision. An offset an radius can be used for control.

The effects to invoke when the attack starts, complete or on update while the attack is active.

Uses a ItemEffectGroup on start or complete. The effect can be made to be invoked only for certain Substate Index values or Attack IDs.

Enable or Disable a GameObject while the attack is taking place. The effect can be made to be invoked only for certain Substate Index values or Attack IDs.

The impact to invoke when the attack collides with a target.

Uses a ImpactActionGroup. The impact can be made to be invoked only for certain Substate Index values or Attack IDs.

On Impact the surface impacted can be defined as solid which can potentially cause a recoil.

If a solid object ShieldCollider or RecoilObject is detected as the impacted object, an additive SubstateIndex is set. This allows the animation to change.

Extra modules that do not fit in any other group.

Enable and or spawn a trail that can be set to be always active or only active while attacking.