The module groups for the ShootableActions are 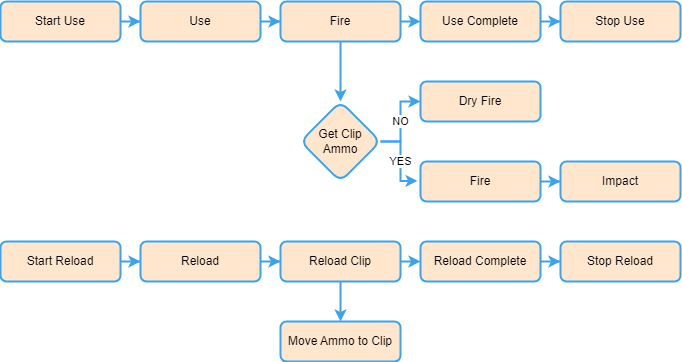 The Shooter modules are used to fire the projectiles. The ShootableFireData contains the following properties

This module uses a raycast to detect the target to impact instead of spawning a projectile.

Spawns a projectile GameObject and listens to the impact event.

If you are unable to fire a new Shootable Action ensure you have checked the following:

The ammo used is normally determined by the ItemDefinition or is infinite. The AmmoData added to the ShootableStreamData contains the following properties

Ammo that is never depleted.

A simple clip that can contain a fixed amount of ammo.

This module defines what projectile object gets spawned and when. The ProjectileData contains the following properties

This module defines what projectile object gets spawned and when.

Spawn a projectile. The projectile can be spawned when fired but also during reload or when aiming.

FireEffects are effects that get triggered but do not return any values to the ShootableAction. They are usually used for polish.

Spawn a muzzle effect when the weapon fires.

An effect that spawns a puff of smoke.

A module that adds a recoil effect on each shot.

This module allows crosshair spread when firing with the shootable weapon.

Invoke functions when the projectile impacts a target.

The module in charge of reloading the item.

A module that uses animation events to flow through the reload. The module takes into account most needs for a reload module such as animating the clip being replaced.

Extra modules that do not fit in any other group.

Used to enable a scope object on a weapon.

This module allows you to set the animation substate to animate the item when it is out of ammo.

Adds a look sensitivity to the shootable weapon. This avoids the item from being used when it is not looking in the fire direction.

A module used to define what information to show in the Slot Item Monitor.

This module will prevent the shootable action from dry firing by preventing start use if there is no ammo.