The MagicAction component is used to create items that can cast spells. It is the most flexible of the ItemActions but also the most complex. 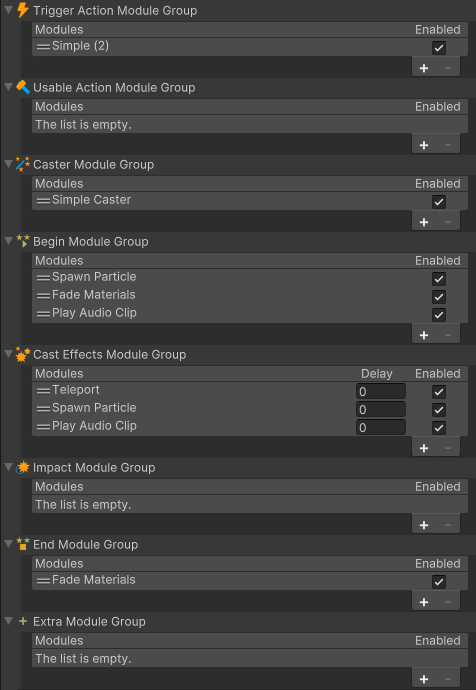 The Module groups for the MagicActions are

The Caster modules are used to casting the Cast Effects.

The MagicCastData contains the following properties

The Begin and End module groups share the same type of MagicStartStopModule.

These are modules that have a Start, Update and Stop function.

Fades the materials on the character.

Start and stop an AudioClip, perfect for AudioClips that need to loop until they should be stopped.

Spawn particles. This is perfect for particles that need to loop until they should be stopped.

Enable or disable a GameObject between start and stop.

Cast effects can start and complete. It differs from StartStop modules because the caster knows when the cast has completed by checking that the cast effects are done.

Do a Raycast, SphereCast or OverlapSphere to detect targets to impact.

Spawns an object when the cast is performed.

Spawns a particle when the cast is performed.

Spawns a projectile when the cast is performed.

Starts an effect on the character.

Invokes Item Effects from an ItemEffectGroup.

Invoke functions when the a cast impacts a target.

The Ricochet action will cast a new CastAction for nearby objects, creating a ricochet effect.