We recommend the following flow when just getting started with the character controller: 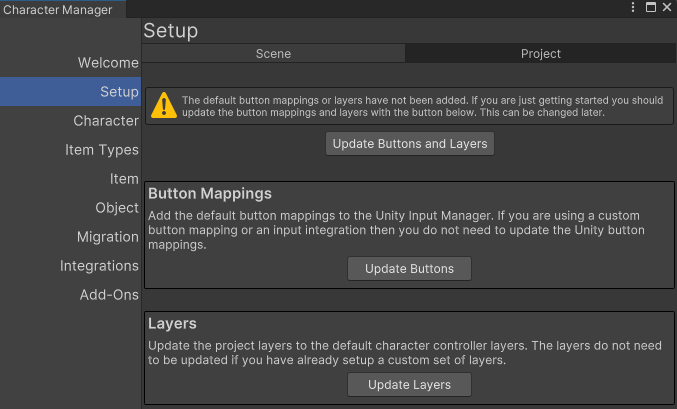 If you are just getting started you should click the “Update Buttons and Layers” button. This will add the default button mappings and layer settings.

The layers will update Unity’s layer settings. This is recommended so the correct default layer names appear. These layers can later be remapped within the character’s Layer Manager.

If you would like to perform the button or layer update later you can do so by selecting the Tools -> Opsive -> Ultimate Character Controller -> Main Manager menu option and then select the Setup button followed by the Project tab at the top. 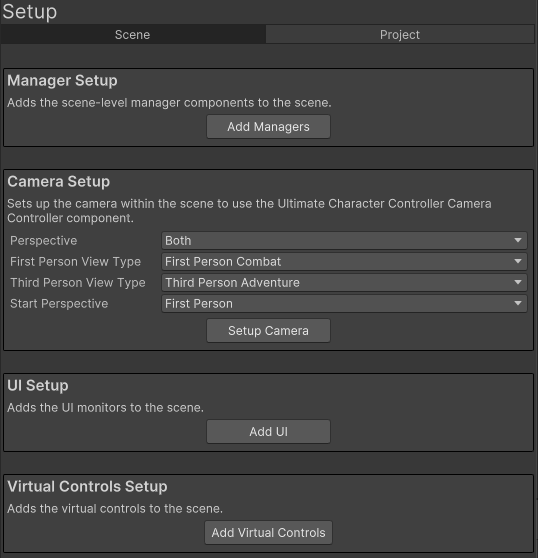 To get started click the “Add Managers” button. This will add the “Game” GameObject to the scene with all of the necessary scene-level components. The Camera Controller can then be setup by clicking the “Setup Camera” button. Make sure you first select the perspective and view type that you’d like to use.

The Setup Manager can also setup the default UI and virtual controls but this is not required to get started. If you do add the UI or virtual controls you can later customize it to fit the style of your game.

The Character Creation page gives details on how to create a new character.

The Item Type Creation page gives details on how to create a new Item Type.

The Item Creation page gives details on how to create a new item.