The Surface Manager component can be used to trigger effects depending on the object texture, thus reducing the need for assigning a Surface Identifier to every GameObject in the scene. It also has default fallbacks for (potentially missing) Surface Impact and Surface Types. 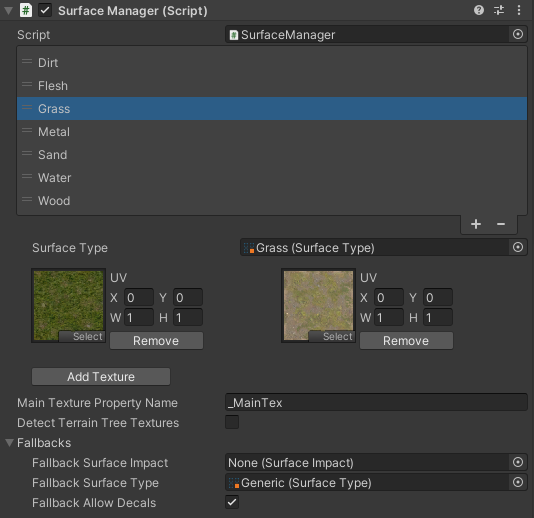 The Surface Manager will try to determine the Surface Type of the object hit from various sources including single textures, textures among multi-materials, and terrain textures. It is also possible to define UV regions for textures inside the inspector (for atlas maps).

Click on the plus symbol of the reorderable list in order to add a new Object Surface. The Surface Type should be assigned along with a list of textures that correspond to that Surface Type.

The UV field allows for the surface to be restricted within a rectangular region inside a texture. The Object Surface element higher in the list will be selected if two Object Surfaces share the same texture and having overlapping UVs. If you want to have several surfaces inside a single texture then you should add that texture to each Object Surface Element.

Fallbacks are very powerful as they allow you to provide rough behavior for all of the surfaces in your game with all of the effect combinations accounted for with an absolute minimum amount of work.

When Allow Decals is false (recommended) the default fallbacks will not be able to spawn decals, even if the Surface Effect has them. This will prevent fallback decals that don’t fit well with the target surface.

When a decal is added to an object it can be set to the child of that object. Due to Unity engine internals, childing a decal to an object with a non-uniform scale (meaning the x, y, and z scale are not identical) will result in decals that are strangely stretched/warped. Because of this objects that are non-uniform will only receive decals if the Allow Non Uniform Decals toggle is true within the Decal Manager.

The warping of the decals may be very slight and acceptable if the object has only slight scale deviations on one or more axes. If the scale deviations are considerable then the decals will start to look very deformed when they are parented. There are three workarounds for this: