The Speed Change ability allows the character to change speeds. This ability will most commonly be used for running but can be used for other speeds such as sneaking. When the ability activates it will set the Speed Animator parameter. A Speed value of 0 indicates that the ability is not active. This parameter can persist when other abilities are active so those abilities know that the character has a different speed.

When the character uses root motion the Speed Change ability doesn’t actually change the character’s speed – it is still up to the animation to change the character’s speed. When the Speed Change ability is active it will multiply the Horizontal and Forward Movement Animator parameters which will then allow the Animator to know that it should play an animation that has a different speed. For an example take a look at the Movement blend tree within the Base Layer -> Movement substate. Notice for any of the running animations it blends based on a value of 2: 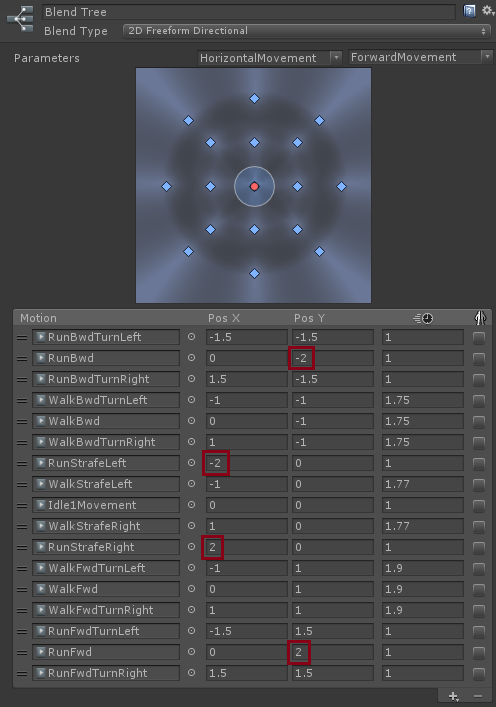 With this setup when the Horizontal or Forward Movement parameter has a value of -2 or 2 then the character will play the running animation. This can also be used in reverse – if you’d like the character to sneak then the Speed Change Multiplier should be set to 0.5 so a sneaking animation can be added to the blend tree when the Horizontal or Forward Movement parameters have a value of 0.5.

The speed multiplier when the ability is active. This value will affect the Character Locomotion’s Input Vector value.

The minimum and maximum value that the SpeedChangeMultiplier can change the InputVector value to.

Specifies the value to set the Speed Animator parameter to.

Does the ability require movement in order to stay active?