After importing into your project a dialogue will appear which checks for the basic requirements:

The following checks are performed:

This page describes the process if you are updating from a version prior to version 3.0. Assuming all of these requirements are satisfied you can click Install to import the latest version. The Opsive/Installer folder can then be removed.

If you receive any errors upon import it is likely because of a namespace conflict. Lets say that you have an existing project and in that project you have a class named Health:

If you have this class in your project and import the Ultimate Character Controller you’ll receive errors similar to: 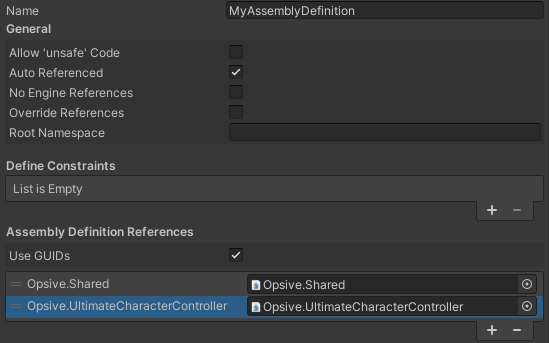 In order to reduce the download size the demo scene does not contain any lightmapping. When the scene first opens it will appear dark and this can be corrected by baking the scene. If the lights are not baked before hitting play they will automatically be disabled.

The Ultimate Character Controller contains many animations/textures which increase the amount of time that it takes to import the asset. If you don’t care about the demo scene content and want an extremely fast import time you can deselect the Opsive/UltimateCharacterController/Demo folder and it will not bring in any assets used within the demo scene. Note that this will not bring in any animator controllers or animations so if you want these make sure you import the Demo/Animations and Demo/Animator folders.

When you import the Ultimate Character Controller into a fresh project you should receive no errors but there will be some warnings related to the animations, such as:

The reason this warning exists is because the animations were authored in Blender and Unity doesn’t like the way Blender exported the animation. Unfortunately there’s not a way around this but this is a one time warning and does not affect the animations when they are playing.