The Trajectory Object is the base component for any object that is projected from the character.This can include a wide range of objects including rockets, arrows, grenades, or shells. If the Trajectory component is added directly to the character then it can also show a trajectory curve of the direction that the object will follow. 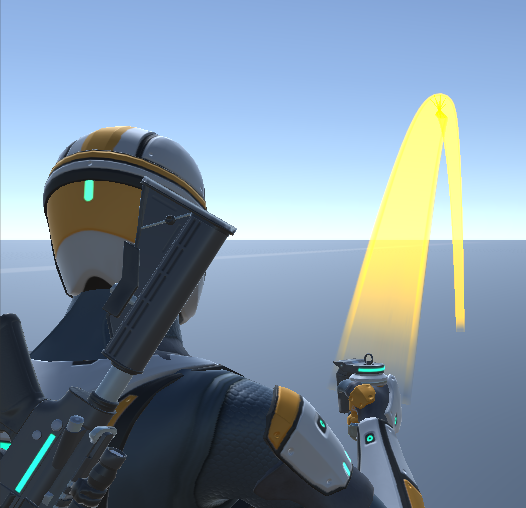 The Trajectory Object component can optionally display a curve indicating where the object is going to move towards when launched. This is a deterministic curve so the path will be accurate for where the object lands. This curve can also be used within VR to show the location that the first person player is going to teleport to.

Should the component initialize when enabled?

A multiplier to apply to the starting velocity.This is useful for simulation when the trajectory curve should account for any velocity that is added to the character when the object is being thrown.

The amount of gravity to apply to the object. The gravity direction is determined by the character’s up direction.

The movement speed of the object. This value is multiplied by the velocity to give the final new position.A larger speed value is most useful if the trajectory curve is visible to reduce the number of total positions.

The rotation speed of the object. This value is slerped between the original rotation and the target rotation.

The damping value to apply to the movement.The higher the damping the quicker the object will stop moving.

The damping value to apply to the rotation. The higher the damping the quicker the object will stop rotating.

Should the object rotate in the direction that the object is moving? This is useful for a bow and arrow where the arrow should face in the movement direction.

Starts to rotate to the settle rotation when the velocity magnitude is less than the specified values.

The layers that the object can collide with.

The identifier that is used when the object collides with another object. If the identifier is null it can be overridden by the object initializing the trajectory object.

When a force is applied the multiplier will modify the magnitude of the force.

Specifies how the object should behave after hitting another collider.

Specifies the multiplier to apply to the reflectvelocity (if the object can reflect).

The maximum number of objects that the projectile can collide with at a time.

The maximum number of positions any single curve amplitude can contain.This is only used when the curve is being displayed.