Begin and End Actions implement the same base class so the same object can be used for either the start or end of the Magic Item use. These actions allow for starting or ending effects effects, such as starting to fade the character before a teleport or spawn a local particle system that should occur after the actual cast.

Fades the materials on the character.

When a Cast Action collides with an object it can start an Impact Action. This allows for effects to be played at the impact location.

Uses the physics system to determine the impacted object.

Plays an audio clip when the cast is performed.

Spawns an object when the cast is performed.

Spawns a particle when the cast is performed.

Spawns a projectile when the cast is performed.

Starts an effect on the character.

Immediately calls impact on the object at the target position.

Impact Actions play an effect at the location determined by the Cast Action. Frequent Impact Actions will be to spawn a particle or change an Attribute value.

Adds a force to the impacted object.

Adds a torque to the impacted object.

Modifies the specified attribute on the impacted object.

Plays an AudioClip on the impacted object.

The Ricochet action will cast a new CastAction for nearby objects, creating a ricochet effect.

Spawns a ParticleSystem upon impact.

When a Cast Action effect plays it can collide with other objects to play an Impact Action. This collision can occurs with one of the following methods: 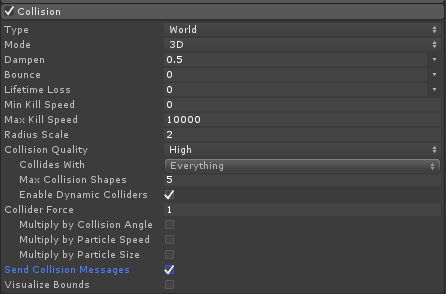 The Magic Projectile component will trigger an impact when it collides with another object. The Magic Particle component uses the Trajectory Object component to do its actual movement.

Is the character required to be on the ground?

The direction of the cast.

Should the look source be used when determining the cast direction?

The maximum distance of the movement cast direction.

The radius of the movement cast direction.

The layers that the movement directions can collide with.

The maximum angle that the target object can be compared to the character’s forward direction.

The maximum number of colliders that can be detected by the target cast.

The number of objects that a single cast should cast.

The transform used to indicate the surface. Can be null.

The offset when positioning the surface indicator.

Specifies how often the cast is used.

The minimum duration of the continuous use type. If a value of -1 is set then the item will be stopped when the stop is requested.

Should the continuous use type cast every update?

The amount of the ItemIdentifier that should be used each cast.

Specifies when the cast should be interrupted.

The SurfaceImpact of the cast.

The value to add to the Item Substate Index when the item can stop.