After the Ultimate Inventory System has been imported you will receive an error which states:

A tree couldn’t be loaded because the prefab is missing.

This error only appears once upon import and is harmless. This error is incorrect and Unity is aware of the bug. If you can upvote this bug that is highly appreciated!

In addition to the import error there will also be a few animation related warnings:

The reason this warning exists is because the animations were authored in Blender and Unity doesn’t like the way Blender exported the animation. There’s not a way around this but this is a one time warning and does not affect the animations when they are playing.

After the Ultimate Inventory System has imported it is recommended that you take a look at the included demo scene to see how everything works. The main demo scene is located at Opsive/UltimateInventorySystem/Demo/Demo.unity.

Some Additional demo scene focused on showcasing and explaining specific features are located in the Opsive/UltimateInventorySystem/Demo/_FeatureDemos folder.

In order to reduce space the Demo folder can be removed and the inventory system will continue to function.

Note: A prompt will ask if you wish to dupplicate the prefabs referenced by the database. This is useful in case you plan on reusing many of the prefab assets from the demo scene in your project. Having dupplicating them will stop referencing the original demo prefabs, meaning updaing the Ultimate Inventory System package won’t override the prefabs you duplicated.

Note: All the demo prefabs, scriptable objects and scene will still reference the DemoInventoryDatabase. The assets in the project that references the demo database can be updated to use a new database. This can be done by right-clicking a folder, prefab, scene, and or scriptable object and going to Ultimate Inventory System -> Replace Database Objects. It is important to note that any assets created and or modified under the Opsive folder can and will be overwritten when the inventory system is imported again. As a result it is recommended to avoid using the original demo prefabs/scriptable objects in your personal projects.

Databases can be duplicated from the cog button:

Important: Creating the parent folder of the database within the OS file explorer while creating a database may cause a “Missing Parent Folder” error. Simply create the parent folder first and then press the “New” or “Duplicate” button.

For tips on creating a new database from scratch go here.

The Inventory component can be used for any game object not just the player. The player Inventory will most likely have a few additional components which are extremely useful:

It is recommended to Tag the character as “Player” as some of the editor manager will use that tag to automatically fill in some fields.

The Inventory comes with a built-in save system. It works by adding “Saver” components next to the components you would like to save. The Save System Manager can use those saver components to save and load data.

Therefore the save setup adds the the Save System Manager on the “Game” gameobject if it does not exist. It also adds the matching Saver components to the object specified in the field. For example if the object has the components:

This section lets you create an Item Pickup Template, for 2D or 3D games. Once the template is created, edit it and save it as a prefab which you can reuse. Simply set the Item on the Item Object component at edit or runtime.
The item pickup can be pooled for reuse.

Open the UI Designer Manager to start adding UI to your scene.

In the Setup tab under the “Create Canvas Managers” Click “Setup”, This will spawn the canvas and Display Panel Manager required by the UI system.

Then under the UI Designer Schema section select a schema you like and duplicate it by pressing “Duplicate”. You won’t be able to use UI Designer until you duplicate the schema. This is to make sure that you will have your very own collection of prefabs in case you make changes. 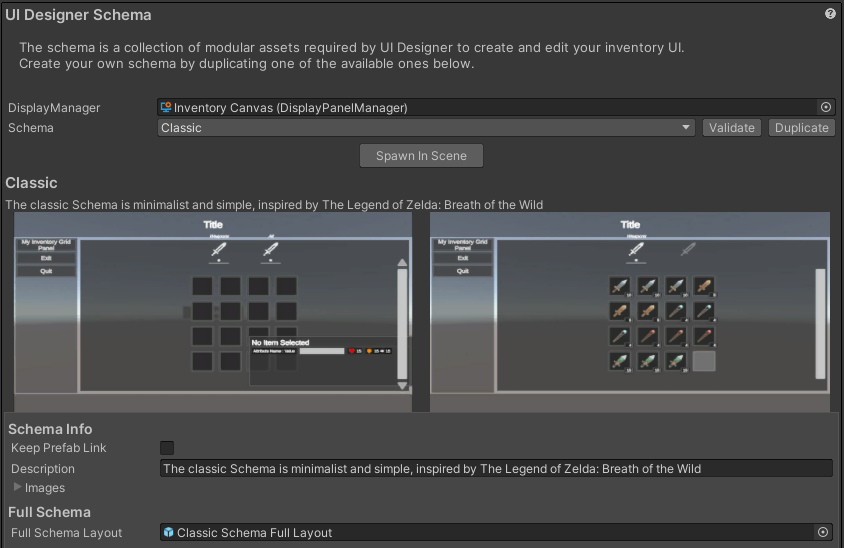 Once you have duplicated the schema press the “Spawn In Scene” button to quickly setup a basic menu for the schema.

From there the other tabs will be available to you and you may use them to create, find and edit your UI.

Where to go from there

From that point you should have a completely working Inventory in your game. You may start by adding object to your Inventory Database, start small and simple. For tips on the Attributes to use for your Items head to the Attribute section of the documentation.

Once the Inventory database has some items, currencies and/or recipes. try them out in your scene by adding them to Inventories, Currency Owners, and Crafters respectively.

Make sure to read the Documentation thoroughly and watch the video tutorials. If you wish to know more or have questions or feature requests, please head to the forum where we will personally help you in any way we can.