Currency is an object that contains data on how it converts to another currency. It is that simple. For example let’s say that you want to implement a classic bronze, silver, and gold currency:

And just like that we have set up currencies. This data doesn’t do anything by itself but when coupled with a Currency Collection they are used as constraints to know when and how to convert one currency to another.

You can set up as many currencies as necessary. In the example above there is only one root currency and that is Bronze. You can have many roots, but keep in mind that currencies that do not share the same root cannot be converted to one another. The conversion rate is computed by using the root base currency as reference.

When dealing with shops its also useful to have price drops or price inflation. Therefore you can also do:

Note that the Currency Collection may lose precision in some equations because it always keeps currency amounts to a valid state. Using the same example we cannot have amount lower than 1 Bronze or higher than 99 Gold 99 Silver 99 Bronze (the 99 was defined the currency specification).

The Currency Owner is essentially an inventory for your currency. If your character can use currency then the Currency Owner should be added to them. Currency can be anything in an abstract sense. It can be an object, a value, a concept, etc. The currency system does not impose restrictions on the type of currency used. If you’d like to implement your own currency logic you can implement the CurrencyOwner<CurrencyT> class with your own currency type. The Shop also has a Shop<CurrencyType> class that can be implemented.

Item can be given a price as attributes. It is recommend to use the Currency Amounts attribute type which lets choose an array of amounts of currency. In the shop you are able to set a buy and sell price using an attribute name. 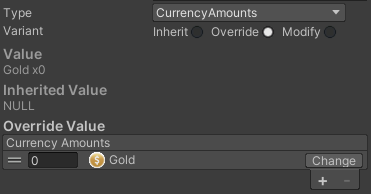