This integration package can be downloaded on the downloads page.

The Opsive Character Controllers are integrated with Behavior Designer allowing your AI to perform any function that a player-controlled character can perform. The Ultimate Character Controller integration contains a demo scene that is designed to work with both shootable and melee weapons.

When the integration is imported there will be four sample scenes included:

The behavior tree for these four scenes are exactly the same and the only difference is the player perspective and which weapon the characters have equipped.

When you are creating a new character that should be used with Behavior Designer ensure you have enabled AI Agent within the Character Manager. If you are using Unity’s Navigation Mesh you should also enabled the NavMeshAgent toggle.

After the character has been created the following components should also be added:

The Behavior Tree Agent component can be found within the Opsive Character Controller integration package. In the demo scene you’ll notice that there is also a Demo Agent component added which adds the character’s health and ammo as property’s for Behavior Designer’s Property Mapping feature.

The included behavior tree will perform the following functions:

Behavior trees evaluate from top to bottom, left to right. This means that the very first task that runs is the Sequence task directly beneath the Entry task:

The Sequence task is a Composite task that will evaluate all of its children until a child returns a status of failure. The Sequence task can be thought of an AND between the child tasks. The first three tasks that this Sequence task will execute relate to resetting the behavior tree to get it ready for the next run. The variables that these tasks are resetting will be described later. A Parallel task is then used to execute multiple children at the same time. There are two branches that this Parallel task will execute:

The main functionality of the tree is contained within the left branch:

This branch is parented with a Repeater task which is set to Repeat Forever. The Repeater task is a Decorator which will keep executing the child branch for as long as requested. Since Repeat Forever is enabled the Repeater will keep the branch active until the bheavior tree ends. A Selector is parented to the Repeater. The Selector task will execute its children until a child returns success. The Selector can be thought of as as OR between the child tasks.

Because behavior trees evaluate from left to right the branches on the left have a higher priority than those on the right. This means that the very first branch that will execute is the branch that checks to determine if the agent is out of ammo:

The first task within the Can See branch is the Can See Object task from the Movement Pack. Can See Object will use a layer mask to search for any objects within sight. The player is on the Character layer so the task will only search for objects that are on that layer. Once the task finds the player the Is Alive task executes which will determine if the player is alive. There’s no need to attack a dead character. The Set Shared GameObject task is then a helper task that will transfer the found Can See Object value to the Target variable. This is done so when other tasks operate on the found player variable the original object isn’t lost. Two Set Bool tasks are then executed which indicates that the agent should wander if the player is lost and that the target’s position should be updated. The right branch under the original Parallel task will then set the target’s position to the Last Position variable.

While the Attack branch is running the Move Towards branch will also run. This branch contains two parts:

After the agent has move to be within distance of the target the right branch will keep the agent near the target. There are three main differences between this branch and the previous Move Towards branch: 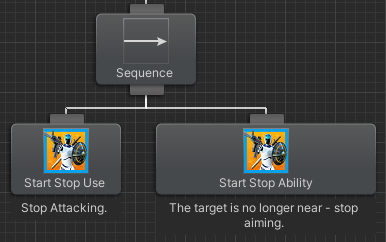 The agent will now attack and move towards the target while within distance. If the target gets away from the agent and moves too far away then the right Move Towards branch will return failure and execute the Reset branch. This Reset branch runs two Actions which will ensure the agent is no longer attacking and is no longer aiming.

After the agent has either retrieved a health pack or determines that more health is not needed the branch will end. Remember that the Wander variable was set to true so the Wander branch will start executing if there are no more higher priority branches.

The next highest priority branch is the Can Hear branch. This branch uses the Can Hear Object task from the Movement Pack to determine if any audio sources are emitted a sound. If any audio is heard then the agent will run towards the audio source position by starting the Speed Change task and using the Seek task to move into position. The Wander variable is also set to true so the agent will wander if the target can’t be seen by the time the agent arrives at the Seek location.

Throughout the execution of the tree there have been multiple cases where the Wander task was set to true. The Bool Comparison task will compare this Wander task variable to true to determine if the agent should wander. Before the agent can wander they first have to Seek to the Last Position. This variable will be set whenever the Update Position variable is true and it will indicate the last position that the target was located. When the agent arrives at the Last Position the Wander task will then execute which allows the agent to search for the target.

Remember that during this time the higher priority branches are being reevaluted so if the player comes within sight of the agent at any time then the Can See branch will abort the current branch so the character can start to attack. The Wander task is parented to the Parallel Selector task which will execute all children until a child returns success. To the right of the Wander task is the Wait task which will return success after a predetermined duration. This will prevent the agent from wandering forever and put a cap to the amount of time that the agent wanders.

If no other branches need to execute then the tree will fall back to the Patrol branch. This branch will move the character between patrol points and keep the character moving until a higher priority branch aborts it. 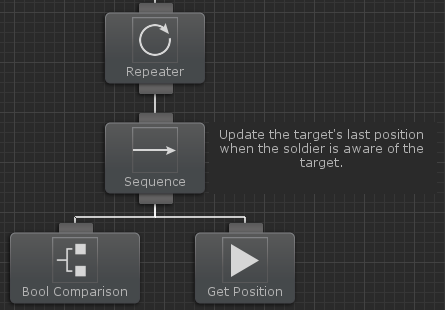 Now that you’ve completed this overview you should have enough knowledge to get started to create you own tree with the Ultimate Character Controller. Make sure you go through the demo tree a few times to get familiar with Behavior Designer’s visual editor.