Shared Variables can automatically be synchronized over the network from the server to the client. This can be enabled by opening the details of the variable and selecting “Network Sync”: 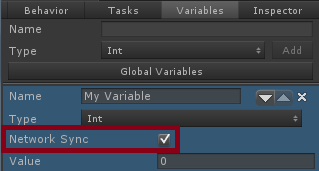 The ENABLE_MULTIPLAYER compiler definition must be added for the variables to sync correctly.

Due to a current networking limitation, ClientRPC calls cannot be overloaded so the type has to be known ahead of time. This means that only the following types of variables can be synchronized:

The Behavior component from the runtime source code must be used in order to allow the variables to be synchronized. This is a result of a current Unity networking bug. ClientRPC calls cannot be called on the parent class from a subclass. A bug report has been submitted and are waiting for a fix. This bug manifests itself by displaying the following warning in the console:

Where [RpcPath] is the method path, [ObjectID] is the ID of the object, and [NetID] is the network ID.