What is a Behavior Tree?

Behavior trees are a popular AI technique used in many games. Halo 2 was the first mainstream game to use behavior trees and they started to become more popular after a detailed description of how they were used in Halo 2 was released. Behavior trees are a combination of many different AI techniques: hierarchical state machines, scheduling, planning, and action execution. One of their main advantages is that they are easy to understand and can be created using a visual editor. Some would even say that they are the cornerstone of modern AI:

At the simplest level behavior trees are a collection of tasks. There are four different types of tasks: action, conditional, composite, and decorator. Action tasks are probably the easiest to understand in that they alter the state of the game in some way. Conditional tasks test some property of the game. For example, in the tree below the AI agent has two conditional tasks and two action tasks. The first two conditional tasks check to see if there is an enemy within sight of the agent and then ensures the agent has enough bullets to fire his weapon. If both of these conditions are true then the two action tasks will run. One of the action tasks shoots the weapon and the other task plays a shooting animation. The real power of behavior trees comes into play when you form different sub-trees. The two shooting actions could form one sub-tree. If one of the earlier conditional tasks fails then another sub-tree could be made that plays a different set of action tasks such as running away from the enemy. You can group sub-trees on top of each other to form a high level behavior. 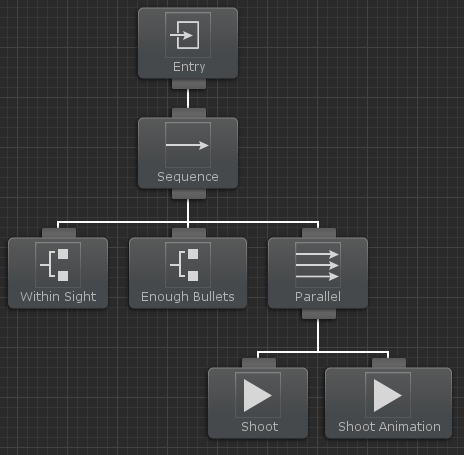 One of the major behavior tree topics that we have left out so far is the return status of a task. You may have a task that takes more than one frame to complete. For example, most animations aren’t going to start and finish within just one frame. In addition, conditional tasks need a way to tell their parent task whether or not the condition was true so the parent task can decide if it should keep running its children. Both of these problems can be solved using a task status. A task is in one of three different states: running, success, or failure. In the first example the shoot animation task has a task status of running for as long as the shoot animation is playing. The conditional task of determining if an enemy is within sight will return success or failure within one frame.

Behavior Designer takes all of these concepts and packages it up in an easy to use interface with an API that is similar to Unity’s MonoBehaviour API. Behavior Designer includes many composite and decorator classes within the standard installation. Action and conditional tasks are more game specific so not as many of those tasks are included but there are many examples within the sample projects. New tasks can be created by extending from one of the task types. In addition, many videos have been created to make learning Behavior Designer as easy as possible.