Shared Variables are great for sharing data across tasks and behavior trees. However, in some cases you want to share to same variables with non-behavior tree components. As an example, you may have a GUI Controller component which manages the GUI. This GUI Controller displays a GUI element indicating whether or not the agent being controlled by the behavior tree is alive. It does this by having a boolean which says whether or not the agent is alive:

With the Variable Synchronizer component, you can automatically keep this boolean and the corresponding Shared Variable synchronized with each other.

Following that, add the Behavior Designer/Variable Synchronizer component to a GameObject.

Next, start adding the Shared Variable that you want to keep synchronized. For this example we are going to add the Is Alive variable that was previously mentioned. 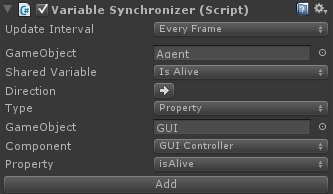 Once added the Is Alive Shared Variable will set the isAlive property at an interval specified by Update interval. The following screenshot contains a few more synchronized variables: