The Setup Manager contains options for setting up your project and scene. These options will only need to be run once when you are creating a new project or a new scene. The Setup Manager can be accessed via Tools -> Opsive -> Ultimate Character Controller -> Main Manager.

When the Ultimate Character Controller is first imported a dialog will appear if you want to update the input manager and the layers. If you select no to either of these options (or would like to start fresh with these settings) then you can access them again through the Project tab of the Setup Manager. 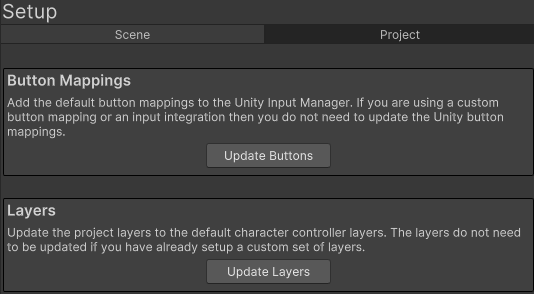 The scene tab contains the options for each scene.

The Ultimate Character Controller uses a set of scene level managers for various tasks such as the object pool or surface manager. These managers should be added to the scene initially and will be placed on the “Game” GameObject within the scene.

If the character is controlled by a player (versus being an AI or networked character) then it will most likely have a camera following it. The Camera Setup button will add the camera and necessary components to the scene. If a camera is already within the scene and has the “MainCamera” tag then that camera will be used.

The UI Setup button will create a Canvas if there isn’t already one within the scene and instantiate the Monitors prefab from the Opsive/UltimateCharacterController/Demo/UI directory. This prefab gives a good starting point for you to start customizing your UI.

If you are on a mobile platform then you will likely want to control the character via virtual controls. If you click the Add Virtual Controls button then the manager will instantiate the VirtualControls prefab from the Opsive/UltimateCharacterController/Demo/UI directory. This prefab contains an example of using a virtual joystick, touchpad, and button on the screen.