Skip to content
For version 2 we decided that we wanted to include high quality audio for the sound effects. We launched a campaign through UpWork and ended up connecting with Eliran Sivan and Dan Pugsley from Cassini Sound. It was really great working with them so I asked if they could write a quick post about how they created the sound effects. Here’s what they said: 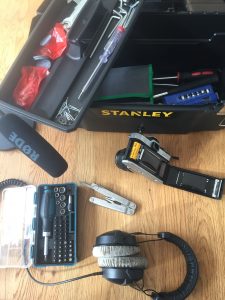 When approaching a project like this we first need to understand the overall vibe of the package or game. Visually speaking, assets for an FPS can be realistic, futuristic or old fashioned so the game style for this particular asset pack was our starting point when approaching the process of sound design. We first asked Justin for an initial build of the Demo (which at the time just included a basic character design and a couple of weapons) along with a list of all of the audio assets required for the project. Our next step was to make a list of everything we needed to record, gathered some materials and set up a recording session, as everything had to be created from scratch.

We used real sand, grass, metal, tiles and water surfaces to get the footsteps and bullet shell impacts and for the bullet shells itself we used a metal sewing thimble and a whipped cream gas cartridge. We had different working tools for weapons and explosions and for the sci-fi door open/close we used the Star Trek method of taking out a piece of paper out of an envelope and combined it with some hydraulic noises and metal clanks. To achieve the lovely creak for the bow we ended up ordering an actual rope from Amazon (which stank of gasoline but it was quite cheap!), and did the job very nicely. Once we had all the basic sounds for our asset list recorded, we divided up the work and started sound designing. The sound design journey usually begin by layering the recorded sounds together with some synthesized digital materials or running them through effects. The raw audio recordings are okay as a starting point but in order to really bring the sounds to life and give them some impact we layered lots of different sounds together whilst also using effects and plugins to either alter the sounds or enhance interesting characteristics.

Equalizers, compressors, reverbs and distortion are all used to make everything sound “Larger Than Life”, which is important for video game experiences as it helps to immerse the player in the action and the game’s world.
Previous Article