The Melee Weapon Item Action allows the character to attack using a melee weapon such as a sword or a baseball bat. Using the Animator Audio State Set from the parent Usable component the melee weapon can chain animations together allowing for combos. The First/Third Person Melee Weapon Properties component will also be attached to the item and this component contains the properties that are specific for that perspective.

If your melee weapon gets stuck after being used the first time ensure you have checked the following:

The First/Third Person Melee Weapon Perspective  contains a “Hitboxes” foldout and within this foldout you can specify the hitboxes that the weapon should use. For most melee weapons you’ll only have one hitbox – a collision box representing the area that the area of the melee weapon that can impact with other objects. In the case of the body item there are four hitboxes: two for the character’s hands and two for the character’s feet. This allows the character to punch or kick using the same item. Hitboxes can use a SphereCollider, BoxCollider, or CapsuleCollider. 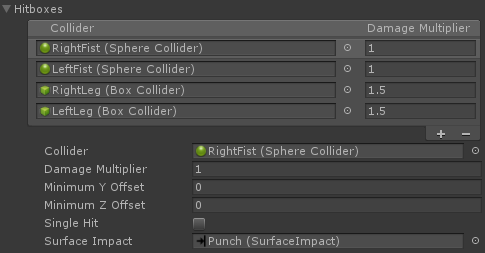 In this screenshot the right fist is selected. A Damage Multiplier can be specified which will multiply the Melee Weapon’s Damage Amount by the specified value. This allows certain colliders to inflict more damage compared to others, such as a kick inflicting more damage than a punch.

The Minimum Y Offset and Minimum Z Offset fields specify the relative offset that the collider position needs to be above in order to inflict damage. This is useful for the leg collider as it prevents a hit from occurring when the foot is on the ground. Single Hit should be enabled if the collider should only do damage once per melee attack. The Surface Impact field allows you to specify a Surface Impact for when the melee weapon collides with another object.

You’ll see a colored gizmo rendered in the scene view when the item is selected in the hierarchy: 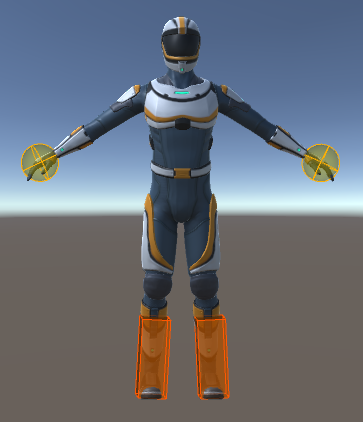 The melee trail object can dynamically draw a smooth curve indicating the previous position of the melee object. This is most often used when the Melee Weapon is attacking, but it can also always be shown (this is set with the Trail Visibility field). A new melee trail object should be created with the Object Manager:

Lets say that the state with an Item Substate Index of 2 is currently playing and the Use Event is triggered after 1 second. The Use Complete event is then triggered 0.5 seconds after the Use Event. With this setup the following flow will occur:

When the melee weapon collides with another object the “OnObjectImpact” event will be sent from the built-in Event System. A corresponding Unity event will also be sent. This event allows you to add new functionality when the impact occurs without having to change the class at all. The following example will subscribe to this event from a new component:

Does the weapon require the In Air Melee Use Item Ability in order to be used while in the air?

Does the weapon require the Melee Counter Attack Item Ability in order to be used?

The value to add to the Item Substate Index when the character is aiming.

The maximum number of collision points which the melee weapon can make contact with.

The sensitivity amount for how much the character must be looking at the hit object in order to detect if the shield should be used (-1 is the most sensitive and 1 is least).

When the weapon attacks should only one hit be registered per use?

If multiple hits can be registered, specifies the minimum frame count between each hit.

The delay after the weapon has been used when a hit can be valid.

Can the next use state play between the ItemUsed and ItemUseComplete events?

A LayerMask of the layers that can be hit by the weapon.

Specifies if the melee weapon can detect triggers.

The amount of damage done to the object hit.

The amount of force to apply to the object hit.

The number of frames to add the impact force to.

The name of the state to activate upon impact.

The number of seconds until the impact state is disabled. A value of -1 will require the state to be disabled manually.

The Surface Impact triggered when the weapon hits an object.

Should recoil be applied when the weapon hits an object?”

Specifies the animator and audio state from a recoil.

A reference to the trail prefab that should be spawned.

Specifies when the melee weapon trail should be shown.

The delay until the trail should be spawned after it is visible.

Specifies if the item should wait for the OnAnimatorStopTrail animation event or wait for the specified duration before stopping the trail during an attack.

Unity event invoked when the weapon hits another object.